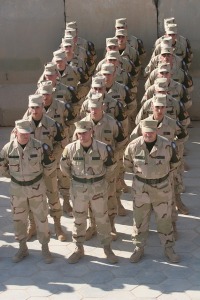 “So all who were numbered of the children of Israel by their fathers’ households, from twenty years old and upward, all who were able to go forth for military service in Israel, even all the numbered men were six hundred three thousand five hundred fifty” (Num. 1:45-46). These verses record the total number of men who were eligible for military service that came out of Egypt at the Exodus. If we add women and children to this number, many biblical scholars estimate that perhaps two million Jews made the Exodus from Egypt under the leadership of Moses. There are several problems with such a large number, outlined by Professor Colin J. Humphreys of Cambridge University.

First, there are some internal inconsistencies with the numbers in the book of Numbers. As an example, the number of firstborn males a month old or more was 22,273, according to Numbers 3:43. That being the case, and given about one million males (assuming that half of the two million Jews were males), this means that the average mother must have had about 100 children—very unlikely! Second, it is hard to imagine such a massive number of people moving and surviving in the desert for forty years, even given the manna, quail, and water. Another problem with such a large number arises when we read Deuteronomy 7:7—“It was not because you were more numerous than all the peoples that Jehovah has set His affection on you and has chosen you, for you were the fewest of all the peoples.” Two million is a very large number, yet the Scriptures indicate that the Jews at that time were the fewest of all the peoples.

Humphreys has discovered that one little word in the ancient Hebrew may have been mistranslated, and that is the word for “thousand.” It turns out that this word can also be translated as “troop” (i.e. military unit). It would certainly make sense to translate this word as “troop,” since Exodus 13:18b says, “And the children of Israel went up arrayed for battle out of the land of Egypt.” When the word is rendered thus, as “troop,” then seventy-four thousand six hundred (those men numbered of the tribe of Judah, for example—Num. 1:27) would read 74 troops and 600 men [total]. When the word “troop” is used, all the numbers in the book of Numbers match up beautifully (with the exception of a few minor deviations for which Humphreys gives very thoughtful and reasonable explanations—see P.S.S. below), and the total number of men of military age is 5,550 rather than 603,550. This translates to roughly 20,000 Jews exiting Egypt instead of two million, and internal inconsistencies, both with the numbers in the book of Numbers and the numbers elsewhere in the Bible, are resolved. Humphreys published his amazing work in the leading Old Testament journal Vetus Testamentum (1998, vol. 48, pp. 196-213).

If Humphreys’ work is correct, he will have to figure out how to explain the numbers in Exodus 38:25-26, where the number of men again is mentioned as 603,550, but where the amount of silver given (100 talents and 1,775 shekels, which was given as a half shekel per person) is a far more reasonable match for 603,550 men than for 5,550 men. I will email him and get back to you with his response.

Once again we see that one word can potentially change everything!

P.S.—Professor Humphreys, by the way, has also published a very fascinating book entitled The Miracles of Exodus (2003, HarperCollins Publishers, Inc., New York) in which he presents very sound scientific explanations of all the miraculous things that happened in the Exodus story, including the identification of the real Mount Sinai—a volcano in Saudi Arabia.